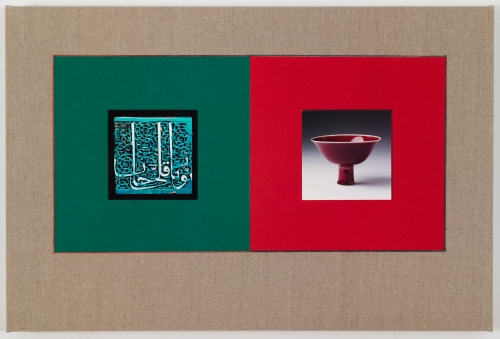 Untitled (from the series, Ancient Through Modern 26), 2016
Postcards and book cloth on linen mounted on panel

Ornament for Indifferent Architecture is the first European museum exhibition of Kamrooz Aram (born 1978, Iran, lives and works in New York). His varied oeuvre often deals with the complex relationship between modern painting and ornament. Through the use of a variety of media including painting, collage and sculpture, Aram seeks a renegotiation of the hierarchical values inherent in art history. The viewer is challenged to reconsider the supposedly lesser position of the decorative arts as something inferior to modern art, which is often associated with individualist expression and originality.

Kamrooz Aram explores the potential of pattern and ornament to function as an essential element in painting. In the Western history of modernist art, which strove doggedly for the autonomy of this medium, the ornamental was met with disdain. The architect Adolf Loos declared in his famous 1908 essay ‘Ornament and Crime’ (‘Ornament und Verbrechen’) that ornament is superfluous and meaningless. Loos proposed that ornament was only acceptable for the non-Western cultures that he deemed to be inferior to modern Europeans. Nevertheless, since antiquity, for many cultures, ornament functioned as more than mere decoration and was employed as a meaningful, even conceptual, element in art and architecture. In his paintings, Kamrooz Aram combines ornamental motifs taken from Persian carpets with geometric patterns reminiscent of vernacular modernist architecture. These painterly compositions appear to be in a state of flux: building up, scraping down and wiping away paint in search of a fleeting resolution. In the end, this process is visible, as the various forms of ornament struggle for dominance with painterly gestures.