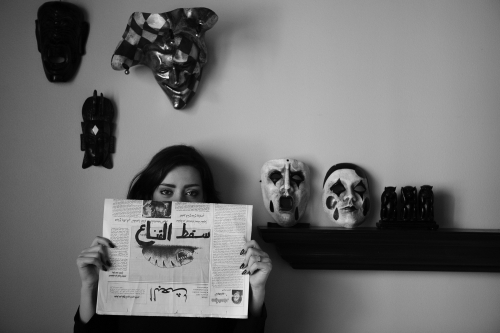 Photographs by 9 Middle Eastern artists, including Jaber Al Azmeh, have been acquired by The British Museum. The artists tackle topics such as the fallout of the Syrian civil war and the tragic plight of refugees. The UK charity, The Art Fund, supported the acquisitions as part of an ongoing initiative launched in 2009 that facilitates collecting Middle Eastern photography at both the Victoria and Albert Museum and the British Museum.

In his series Resurrection (2011 - present), Al Azmeh asked Syrian individuals protesting against the civil war, such as journalists, students, doctors and film-makers, to write comments on upside-down copies of The Ba’ath Newspaper, a propaganda tool of the government.

Two of the works—including Alma Entabli (journalist) ‘The mask has fallen’ (2012)—are on display at the British Museum in Living Histories: Recent Acquisitions of Works on Paper By Contemporary Arab Artists (until 22 October).