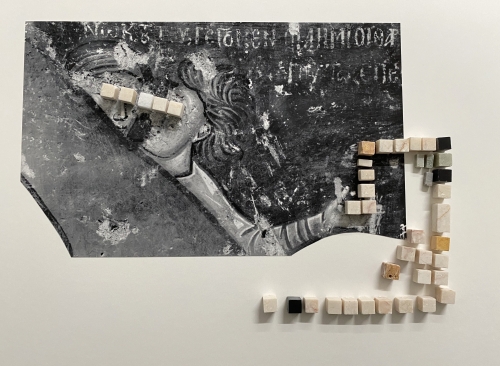 PILOT, hosts the group exhibition Anima Mundi, curated by Özge Yılmaz, between February 4 and March 20, 2021. Bringing together the works of Luna Ece Bal, Emine Boyner Kürşat, Hera Büyüktaşçıyan, Sibel Horada, Lara Ögel and İrem Tok, the exhibition explores the ways of thinking about witchcraft, which is a part of today's eco-feminist political theories.

Six artists in Anima Mundi conduct a research on personal and collective memories with a ritualistic attitude mostly with natural materials. In accordance with the nature of alchemy, the exhibition brings together works that try to convey testimonies without intervening and reveal the invisible magic in daily life and listen to the pulse of the world via air, water, earth and fire. The concept of "witchcraft" underlined in Anima Mundi points to different practices and a wide universe of esotericism; healing, ways of relating to nature / city, personal rituals / rites and alchemy.

The exhibition takes its name from Hekate. As the ancient Greek goddess of witchcraft and the first known witch in history with her skills of healing and divination, and her use of spells; Hekate, who is also the goddess of the moon, magic, the dead, ghosts, tombs and crossroads, is described as Anima Mundi in ancient texts. Hekate is a “liminal” character as she is responsible for borders and passages between dualities such as Titans and the Olympians, earth and underworld, living beings and ghosts. While Hekate was the symbol of the mother goddess cult as the ruler of healing and punishment, light and darkness, this cult was transferred to Artemis and Cybele at some point; Hekate was transformed into a normatively occult identity as the goddess of the night, underground and witchcraft. With this distinction, opposing archetypes such as “compassionate woman / holy mother" and "uncanny / bad / feared woman", which will be attributed to women throughout history, have also emerged. Considering the fact that Hekate's only known temple is in Muğla and how beliefs such as Paganism and Shamanism feed the practice of healing and witchcraft, we can see the parallels of pre-Islamic Anatolian beliefs and witchcraft practices and the association of witchcraft with only western culture restricts this concept.