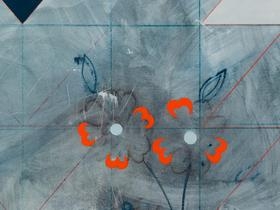 Kamrooz Aram explores the potential of pattern and ornament to function as an essential element in painting. In the Western history of modernist art the ornamental was met with disdain. The architect Adolf Loos declared in his famous 1908 essay Ornament and Crime (Ornament und Verbrechen ) that ornament is superfluous and meaningless. Loos proposed that ornament was only acceptable for the non-Western cultures that he deemed to be inferior to modern Europeans. In his most recent series of paintings, entitled Ornament for Indifferent Architecture & Ornamental Composition for Social Spaces, Kamrooz Aram combines ornamental motifs taken from Persian carpets with geometric patterns reminiscent of vernacular modernist architecture. These painterly compositions appear to be in a state of flux: building up in a grid like pattern, scraping down and wiping away paint in search of a fleeting resolution. In the end, this process is visible, as the various forms of ornament struggle for dominance with painterly gestures.

Trained in both art and architecture, Seher Shah simultaneously evokes traditions of drawing in her artistic practice, using a personal and visionary approach to trouble the otherwise rational language of architectural drawing. Traditional tools for architectural representation, like plan, elevation, and section, are used as metaphors. Through her career, Shah has used this basic approach for different lines of inquiry. She has investigated how architectural fragments can capture and retain meanings and memories, and how they can be reconfigured to represent complex subjectivities. She has examined the relationship, in terms of both form and scale, of architectural structures and their surrounding landscapes. And she has delved into the rich history and legacy of modernist architecture and, in particular, Brutalism.

Based on a series of small A4 size woodcuts she made while at the Glasgow Print Studio in 2015, the new sculptural works’ shapes and volumes feel both ancient and modern, transcending time and history while still bearing their considerable weight. Stylized but symbolic, they suggest an archaic language or a set of prehistoric metalworking tools.